It is a warm summer night in Amboise, as twelve of us take place aboard a very tiny wooden vessel, a few yards from the royal castle. “It is called a toue!” says our captain as a starter. “It is the traditional boat used by bargemen in the old times”. We wanted an authentic tour and we sure got it! 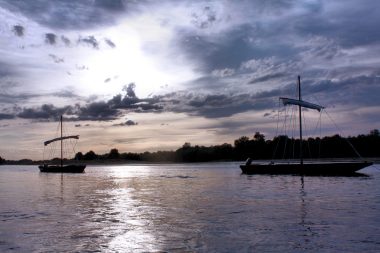 As we skillfully wander between the sandbanks, the wonderful palace of King Francis slowly disappears. Suddenly, our vessel stops. With his finger, our pilot points out starboard where we see some swirls on the clear waters. It is a beaver, disturbed by our passage, who rushes back to the burrow he has dug under the roots of a willow tree. It is a magical moment; the children had never seen one before! Far in the horizon, the sunrays slowly go down behind the treetops. The clearness of the water is amazing, so clear, that we can see some very tiny fish racing around the boat. “These are bleaks; we see many of them in the summer. They are so tasty eaten fried! By the way, who’s hungry? » A unanimous Me sounds, and the captain stops the vessel against a sandbank.

It is actually a small island, in the middle of the royal river. A blanket is quickly unfolded and filled up with plenty of produces taken out of everyone’s baskets. “Taste this,” says the captain. “It’s a pike curry paté. And you’ll definitely enjoy it more with a glass of white sauvignon. A friend of mine makes it, close to Amboise”. The picnic goes on, in a great atmosphere. Everyone tries its best story, but the captain wins it easily: “once, we met with a catfish that nearly turned us over! The creature was nearly 7 feet long!” As the daylight goes down, the captain tells us that we have to go back. Too bad! We wish our trip on the river Loire would have gone all night!

Give your opinion Cancel reply