The arrival of a rock star

During the autumn 1516, a very curious convoy passes the ramparts of Amboise, watched by an amazed crowd. Seating on a mule, a proud white-bearded old man observes this environment, which will now be part of his daily life. In his cart, a multitude of chests full of books, parchments and diverse objects, among which the portrait of a young lady, whose mysterious smile keeps on fascinating the world today. 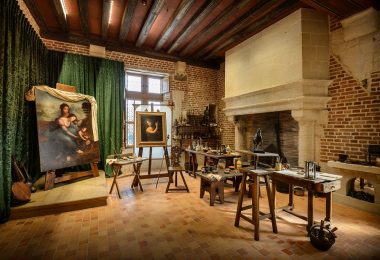 « Here Leonardo, you will be free to dream, think and work » 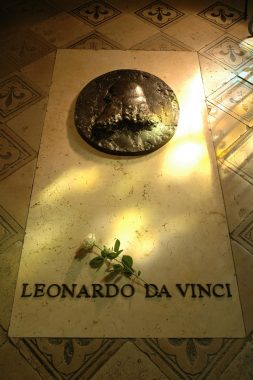 You must have recognized this old man: he’s Leonardo da Vinci! Aged 64, he just accepted King Francois I’s invitation, to spend a happy and studious retirement in his « nice city of Amboise ». The king offers him to live at the Manoir du Cloux, with his two Milanese friends, Francesco Melzi and Battista da Vilanis. « The first painter, architect and engineer of the king », Leonardo works at several great projects for him, often visited by the king and court. So when Leonardo passes away on May 2nd 1519, Francois I mourns his dear « padre » and offers him very moving funerals.

Amboise is forever marked by Leonardo’s life. At the Clos Lucé, you discover the Maestro’s bedroom as well as his workshop, which witnessed the boiling creativity of the greatest artist of the Renaissance. Then meet his faithful cook Mathurine, and enjoy her nice personal stories about their daily life in Amboise. Have fun trying on some of Leonardo’s most extraordinary inventions in the Clos Lucé Park. Finally, pay tribute to the venerable artist in the Saint Hubert Chapel. His inspiring work has crossed the centuries, and from New York to Beijing, his is today a universal figure.

Leonardo da Vinci at the Royal Chateau of Amboise